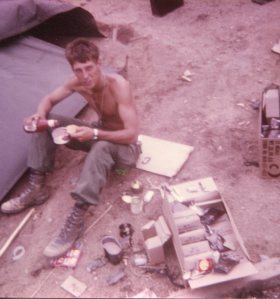 You asked me once how we heat our C rations. Well about once a month they pass out heating tablets, they’re about 4 in. long about 2 in. wide and 1/2 in. deep, and they burn slow so they’re good to heat food with. It takes about 1/3 to 1/2 of a heating tablet to heat a can of C’s.

I have a can labeled ‘water’, unopened, from a C-ration my dad brought home. There’s still liquid, of some sort, inside as it makes a sloshing sound when moved about.

First procured in 1961, the Meal, Combat, Individual (MCI) weighed just under 2 pounds and was produced in 12 different menus. Each menu contained approximately 1200 calories and consisted of:

Soldiers opened the cans with the P38 can opener and though the contents were typically eaten unheated, the food could be warmed using a fuel tablet.

Cigarette brands issued to U.S. soldiers were: Pall Mall, Winston, and Benson and Hedges Menthol. By 1972, cigarettes were no longer included.