Well they told us today that we would be moving to the Bong Song Plains or Bong Song mountains, which one I don’t know yet.  We’ll move out no doubt in the morning tomorrow by copters.

I just came back from a village where we bought some cokes for 40 cents a piece. That cheap, they were 50 cents must be a Saturday sale.  I then went and ate dinner and in the chow line a guy said that it would be the day after tomorrow, so who knows what will happen.  You can’t believe anything until it happens then you still don’t know for sure.

My squad leader said that I might be firing a over and under, it’s a M16 rifle with a M79 grenade launcher underneath it.  That means I carry the over and under with 40 rounds of ammo for the M79, 11 clips of ammo for the M16, 3 canteens, rain coat, 2 ammo pouches, 3 hand grenades, 1 trip flare, 1 smoke flare & my food in C rations.

Well there isn’t much news to tell & if I keep writing about every day the letters will get shorter.

I don’t know if I told you but it is so dirty over here that everytime you get a little cut it gets infected.  You’re dirty all the time here, the only water you can get you want for drinking.  The only place to clean up at is a creek or river.  They give you clean clothes once a week if the copters can get to you.  So I think that I’m going to like it over here (that’s a laugh).

Well I think that I’ll close for now and write when there’s more news. 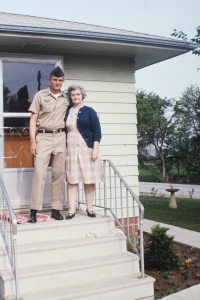